The Rockvale Gun Club was started in the early 1990’s by several of the Rockvale Town Trustee’s and Mayor. The first meeting of about 18 gun enthusiasts was present and out of this meeting the gun club was formed, officers elected and the mountain of paperwork involved was started. The land is located in a box canyon north and west of Rockvale, Colorado, is owned by the Town of Rockvale and managed and operated by the Rockvale Gun Club which is a non-profit organization.

The majority of the improvements to the range is done on a donation and voluntary basis. As a club we prepare and fund the annual Holiday Food Baskets for our underprivileged and elderly residents. We also held fund raisers for deserving recipients throughout the year to help with necessary expenses during a trying time in their lives. We hold several annual events, the Easter Egg Shoot, which benefits the birds and wildlife in the area (they eat well for a few days), also the November Turkey Shoot and December Food Drive Shoot, which are dedicated to the Food Basket event. Early in 2004 one of our members attended a Cowboy Action Shoot and out of that event a dream was born.  The Gun Club had the property, space, time and lots of enthusiasm to follow this dream, hence the Rockvale Bunch was born.

At the monthly meeting of the Gun Club, the possibility of a Cowboy Town with real Cowboy Shooting was discussed and on May 21, 2005 the first Cowboy Action Shooting match was held at the Rockvale Gun Club Range.  It was a great success with 55 contestants participating. We are SASS Affiliated and will follow all SASS rules and regulations. There are numerous individuals, businesses and fellow Cowboy Action Shooting Clubs that donated time, material, labor and wisdom to this project.  These people deserve a lot of thanks for all their efforts.  Our Cowboy Town is  complete and operational. Cowboy Action Shooting matches will be held on the 3rd Saturday of each month at the Rockvale Gun Club Range. 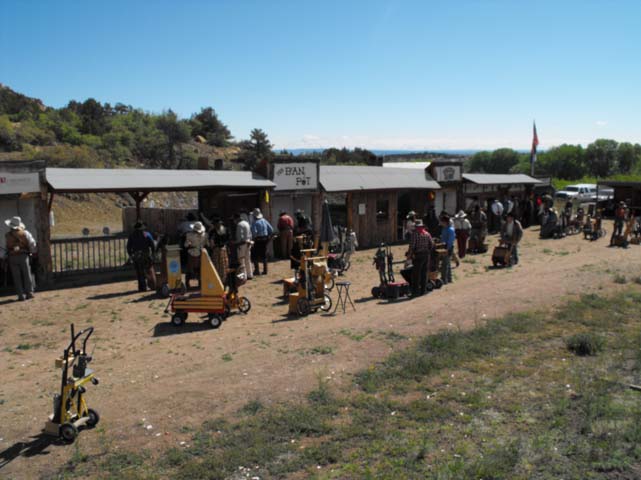